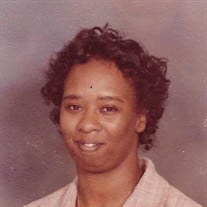 Goldsboro - Ms. Deborah McKinnie, 65, transitioned on Saturday, February 12, 2022. The celebration of her life will be private for her immediate family only. There will be a viewing on Wednesday, February 16, 2022 from 4:00pm to 6pm at J.B.... View Obituary & Service Information

The family of Ms. Deborah Baker McKinnie created this Life Tributes page to make it easy to share your memories.

Send flowers to the McKinnie family.