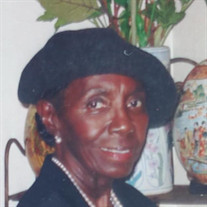 Goldsboro - Ms. Dolores Elaine McKenzie, 84, formerly of California passed on Tuesday, April 28, 2020 at Wayne UNC Health Care, Goldsboro, NC. No formal services will be held at this time. A celebration of life will be held at a later date. Dolores Elaine McKenzie was born on January 1, 1936 to the union of Bennie Barrow and Laura Knight. She was reared in Baton Rouge, LA, but became a long time resident of Suisun City, CA before moving to Goldsboro, NC in 2019, where she departed this earthly life on Tuesday, April 28, 2020. Dolores graduated from Capitol High School in Baton Rouge in 1953 and from Southern University in 1958. She became a Middle and High School teacher, and was truly dedicated to her profession. She loved educating children. She retired from teaching in 1993. She was also a member of the Phi Delta Kappa Sorority, National Council of Negro Women, the American Association of University Women, and California’s Retired Teachers Association. She loved the Lord, which led her to become a member of Mount Calvary Baptist Church in Fairfield, CA. Dolores was truly devoted and grateful to the congregation who continuously conducted wellness checks on her via telephone calls and visits. She loved to travel the world. She enjoyed telling stories about her adventures in places such as Hawaii, Canada, Jamaica, Virgin Islands, Senegal, Gambia, South Africa, and China. She is survived by her children: Alenki Jones and Lynell Wade of Sacramento, CA, Frederick Jones (Julie Ann) of Spring Valley, CA, and Erica Wilson (Ronnie) of Goldsboro, NC; sisters, Patricia Davis of Las Vegas, NV, Valerie Lusk of San Francisco, CA, Deborah Davis of Las Vegas, NV, Shirley Hicks of Baton Rouge, LA, and Charlotte Barrow of Houston, TX; brother, Gregory Davis of Houston, TX; grandchildren, Cortney (Deonte’), Amani (Chris), Frederick, Rashad, Ronnie Jr., Shani, Avril, Daphne, Tuesday and Caleb; great-grandchildren, ZaMari and Khalia; a host of nieces, nephews, great-nieces, great nephews, other relatives and many dear friends. She is preceded in death by her parents and one brother. Due to COVID-19 restrictions, no formal services will be held at this time. A celebration of her life will be held at a later date. If you have any questions or comments, please e-mail them to: [email protected] Thank you. Services of compassionate and distinguished class entrusted to J.B. Rhodes Funeral Home & Cremations of Goldsboro.

Goldsboro - Ms. Dolores Elaine McKenzie, 84, formerly of California passed on Tuesday, April 28, 2020 at Wayne UNC Health Care, Goldsboro, NC. No formal services will be held at this time. A celebration of life will be held at a later date. Dolores... View Obituary & Service Information

The family of Ms. Dolores Elaine McKenzie created this Life Tributes page to make it easy to share your memories.

Send flowers to the McKenzie family.