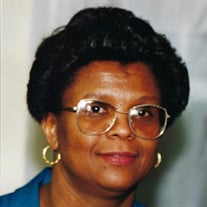 Goldsboro - Mrs. Jennifer L. Robertson, 69, passed on Thursday, April 22, 2021 at Vidant Medical Center, Greenville, NC. The celebration of her life will be held on Thursday, April 29, 2021 at 12:30pm at J.B. Rhodes Funeral Home & Cremations, 1701 Wayne Memorial Drive, Goldsboro, NC, with a viewing from 11:30am to 12:20pm. She will be laid to rest at the Eastern Carolina State Veterans Cemetery, 164 Longs Plant Farm Road, Goldsboro, NC. Jennifer was born on November 21, 1951 to the parents of Luther and Helen McDaniel Hairston of Gillam, West Virginia. After graduating from Norfolk High School in 1970, her love story began with Jerry K.Robertson, retired Chief Master Sergeant USAF, and the two have been inseparable. They married July 31, 1971 and left Gillam, West Virginia and traveled the world together. They were blessed to have two children. Jennifer was a devoted wife and mother and one of the strongest and kindest women to ever walk this earth. She was an avid reader, passionate about cooking and at one time she loved baking and decorating cakes. She gave her all to her family and our family was blessed to have had her in our lives. We will never be able to fill the space left behind by her. Jennifer was predeceased by her father and mother, Luther and Helen Hairston; Sisters Gloria Hairston and Marion Hairston and Nephew Jerald Hairston. Jennifer is survived by her beloved husband Jerry Robertson of Goldsboro, NC, Son Kenneth "Kenny" Hairston of Charlotte, NC and Daughter Nicole "Nikki" Spivey (Garey) of Raleigh, NC. Eight Grandchildren Alyssa, Bria, Kenny Jr., Justin, Mia, Gabrielle, Kayden, and Tremayne. Six Great-grandchildren Alaina, Demetri Jr., DeMia, Deon, Jaleigh, and Jalynn; A special "forever" daughter-in-law Carolyn Hairston and loving Sister-in-Laws, Brother-in-Laws, Nieces, Nephews and Cousins. Services of compassionate and distinguished class entrusted to J.B. Rhodes Funeral Home and Cremations of Goldsboro.

The family of Mrs. Jennifer Lynn Robertson created this Life Tributes page to make it easy to share your memories.

Send flowers to the Robertson family.