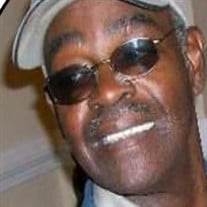 Goldsboro - Mr. John Griffin, 76, passed on Wednesday, December 23, 2020 at Willow Creek Nursing & Rehab Center, Goldsboro, NC. The celebration of life will be held graveside on Saturday, January 9, 2021 at 1:00pm at the Caldwell Cemetery, 150 Caldwell Cemetery Road, Plain Dealing, LA. There will be a viewing held on Friday, January 8, 2021 from 11:00am to 5:00pm at the Heavenly Gates Funeral Home, 1339 Jewell Street, Shreveport, LA. He was born on July 17, 1944 in Plain Dealing, LA to Johnnie Griffin and Venus Payne Griffin. He is survived by three daughters: Sharona Johnson (Darrick) of Goldsboro, NC, Sandra Wilson (Michael) of Bossier City, LA, and Karmashia McDuffie (DeCarlos) of Pikeville, NC. His son Michael Griffin preceded him in death. He leaves a beautiful legacy of grandchildren: Cydney and Chelsea Johnson, Mikela Henderson, Mikah and MJ Wilson, and Iyona McDuffie. He also leaves a legacy of three beautiful great granddaughters: Paisley, Phoenix, and Izabella. Mr. Griffin will be truly missed by his friends and family. Despite his adversities in life, he persevered, provided for his family, and taught them to hold their heads up high in the midst of adversity. Services of compassionate and distinguished class entrusted to J.B. Rhodes Funeral Home & Cremations of Goldsboro.

The family of Mr. John Charles Griffin created this Life Tributes page to make it easy to share your memories.

Send flowers to the Griffin family.