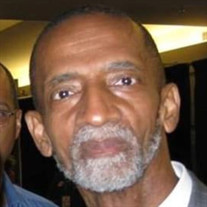 New Jersey - Mr. Kabili Tayari, 70,departed this life after a long battle with sarcoidosis on Saturday, November 14, 2020. Arrangements are incomplete at this time. A civil servant for most of his adult life and resident of Jersey City, NJ, he was born in Wilson, North Carolina on June 26, 1950 to Elizabeth Smith and Eugene Brown. He attended elementary school and high school in Goldsboro, North Carolina. He moved to Jersey City, NJ in 1968 to attend what was then Jersey City State College. Kabili was a consummate advocate for children and education. He served as President of the Jersey City Parents Council in 1989. As President of the Jersey City Parents Council, he worked to increase and equalize funding for schools throughout the state and promoted the Quality Education Act which addressed school funding reform. Later, he served 12 years on the Jersey City Board of Education which included roles as trustee and in 1997 Board President for a full term of 3 years. Kabili was a lifetime community organizer and political activist. He participated in several organizations to advocate for social justice. He served as president of the Jersey City Chapter of the NAACP, president of the National Independent Political Party and a delegate of the Black Issues Convention. Prompted by community concerns about disenfranchisement of voters, Kabili ran for New Jersey state senate representative in 2004. He also served on the New Jersey Association of Black Educators, African Heritage Studies Association and African Liberation Support Committee. Kabili began his career as a civil servant working under Mayor Sharp James in Newark, NJ at the Office of Employment and Training from 1984-1986. Subsequently, in 1997, he continued his work in the Jersey City government under the administration of Mayor Bret Schundler. From 2001 - 2004, he served the late Mayor Glenn D. Cunningham as assistant business administrator and advisor. From 2004 - 2013, he served as deputy mayor under Mayor Jerramiah Healy. At the time of his passing, Kabili served as the Director of Economic and Industrial Development on behalf of Mayor Steve Fulop. He has been described as the city’s point person on social justice and the cannabis policy. The community service awards and accolades Kabili has received for his unwavering dedication to the community are extensive. However, his awards and achievements are not what he would want us to remember. He wound want us to remember his teaching, his humorous nature, his compassion; and he would want us to continue to work towards securing equality and equity for all. He would say, Aluta Continua - The struggle continues. Kabilii was preceded in death by his grandmother, Mary Headen; his grandfather, John Henry Headen; his brothers: Kevin Nichols and Frederick Nichols and his niece, Anissa Hazel. He is survived by his wife, Lynnette Brown; his children: Aminifu and Tamu Brown and Dealva Young; his siblings: Herman Scott (Deborah), Martha Hazel, Mary Hazel, Deborah Nichols, Derek Nichols, Shirley Nichols, Kenneth Nichols (Ilirjana), Alice Whitfield, Alan Whitfield (Zantanya), Tonya Whitfield and LaShawn Whitfield and several beloved nieces and nephews.   In lieu of flowers, please send donations to UNCF and the Foundation for Sarcoidosis Research: United Negro College Fund (UNCF) Attn: Denise Scott Direct Response Programs 1805 7th Street, NW Washington, DC 20001 Foundation for Sarcoidosis Research 1820 W. Webster Avenue, Suite 304 Chicago, IL 60614 Services of compassionate and distinguished class entrusted to J.B. Rhodes Funeral Home & Cremations of Goldsboro.

New Jersey - Mr. Kabili Tayari, 70,departed this life after a long battle with sarcoidosis on Saturday, November 14, 2020. Arrangements are incomplete at this time. A civil servant for most of his adult life and resident of Jersey City,... View Obituary & Service Information

The family of Mr. Kabili Tayari created this Life Tributes page to make it easy to share your memories.

New Jersey - Mr. Kabili Tayari, 70,departed this life after a...

Send flowers to the Tayari family.