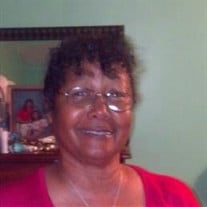 Goldsboro - Ms. Mary Elizabeth Armbrester, 78, passed on Friday, January 22, 2021 at home. The celebration of her life will be graveside on Tuesday, January 26, 2021 at 11:00am at Wayne Memorial Park North, 1191 Old Grantham Road, Goldsboro, NC. Guests are welcomed, provided they practice social distancing and wear masks Mary was born in Wayne County to the late Jasper and Melissa Barnes Richardson on September 5, 1942, the third of their eight children and oldest daughter. She was a proud graduate of Dillard High School, class of 1960. Mary spent most of her life doing what she loved, taking care of children. Whether it was members of her own family, or those she came to love at WAGES childcare, Mary took care of any child who had the honor of being held in her arms. She loved gardening, spending much of her spare time tending to her flowers and vegetables. Mary is survived by her son Virgil Jay Armbrester of Hampton, VA, daughter Melissa (Stuart) Ringwalt of Burlington, NC. She was the proud grandmother of Brittney Armbrester of Newport News, VA and Cameron (Valencia) Armbrester of Sanford, NC. Mary is also survived by four of her siblings, Charlie, Katherine, and Linda Richardson of Goldsboro, NC and Stanley (Diane) Richardson of Newport News, VA and a host of nieces and nephews. She was preceded in death by son Carl Douglas and daughter Bridget and brothers, Jasper, Donnell and Bobby. We, the family, would like to extend a special thank you to UNC Hospitals, and AseraCare Hospice for the care provided to Mary throughout the last few months, and to JB Rhodes funeral home for their services after this loss. Services of compassionate and distinguished class entrusted to J.B Rhodes Funeral Home and Cremations of Goldsboro, NC.

The family of Ms. Mary Elizabeth Armbrester created this Life Tributes page to make it easy to share your memories.

Send flowers to the Armbrester family.