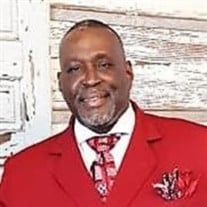 Fayetteville - Mr. Oliver Moses, 62 formerly of Goldsboro, passed on Sunday, September 5, 2021. A memorial celebration will be held on Saturday, September 18, 2021 at 12:00 noon at Faith United Holy Church 1603 S. Slocumb Street, Goldsboro, NC with Bishop Raveion Moses officiating. Oliver Moses, son of the late Ervin and Sallie Barnes Moses, was born February 16, 1959 in Goldsboro, North Carolina. Oliver transitioned from this walk of life on Sunday, September 5, 2021 in his home in Fayetteville, North Carolina. He was affectionately nicknamed “Ollie” by his mother, and known as Ollie by his family and friends. He attended Goldsboro Public Schools. He was in the Goldsboro High School class of 1977. In High School, Ollie played football and exhibited elite potentials. However, during High School Ollie moved to Newark, New Jersey to finish his education. Afterwards, Ollie enlisted in the US Army. In the Army, he worked as a cook and was a recreational Boxer. After leaving the Army, he moved to Brooklyn, New York and advanced his culinary skills and became a Jr. Chief at Junior’s Cheese Cake. For most of Ollie’s life, he was a professional Painter in Raleigh, Greenville, Goldsboro and Fayetteville, NC areas until his death. He met and married his wife, Teresa Edwards, in Fayetteville, NC in December, 2014. Throughout is life’s journey, Ollie came to accept Christ as his Lord and Savior. And enjoyed worshipping with his wife and church members at Bal Perazim Christian Center in Fayetteville, NC. He will always be remembered for his good nature, humor, generosity and hospitality. Oliver was born the eleventh child of twelve siblings. Preceded him in death was his parents, one sister, Mavis Evans-Hamilton and three brothers, Achilon, Swanell and Tony L. Moses. Cherishing his memories are his three Sisters, Grotha M. Spells, Shelvy J. Moses and Elder Sharlene Moses, all of Goldsboro, NC; four brothers, Ervin L. Moses, Houvone Moses (Elder Doris), Bishop Raveion (First Lady Annie), all of Goldsboro, NC and Weaver Moses of Raleigh, NC; his favorite niece, Oteria Q. Moses of Goldsboro; one uncle, H. B. Barnes (Mother Bessie) of Goldsboro; and a host of relatives and friends. Services of compassionate and distinguished class entrusted to J.B. Rhodes Funeral Home & Cremations of Goldsboro. It was my Time Perhaps my time seemed all to brief Don’t lengthen it now with undue grief Lift up your hearts and share with me God wanted me now He set me FREE The Family

The family of Mr. Oliver Moses created this Life Tributes page to make it easy to share your memories.

Send flowers to the Moses family.