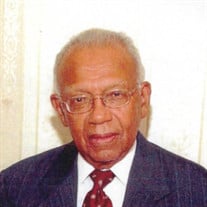 Goldsboro - Dr. Orlando "Papa Doc" Stovall Jr., 99, passed peacefully on Thursday, September 9, 2021 at home. The celebration of his life will be an outside tent service on Monday, September 13, 2021 at 11:00am at First African Baptist Church, 803 Harris Street, Goldsboro, NC. He will be laid to rest at the Wayne Memorial Park, 2925 US Hwy 117 South, Dudley, NC. There will an outside tent viewing held at the church on Sunday, September 12, 2021 from 5:00pm to 7:00pm. Dr. Stovall was born on June 8, 1922 in Edgecombe County, NC to Orlando R. Stovall Sr. and Marie Smith Stovall. He survived by his children: Dr. Sandra Stovall of Charlotte, NC, Yvonne Stovall of the home, Dr. Orlando R. Stovall, III (Vanessa) of Goldsboro, NC and Anthony Stovall of Goldsboro, NC; four grandchildren: Lillienne Umar, Dr. Jonelle Stovall, Kimberly Stovall and Ricky Williams and one great grandchild, Adisa Umar; one aunt, Susie Pugh and a host of other relatives, nieces, nephews and friends. He was preceded in death by his loving wife, Manetta Cox Wooten Stovall. Since it’s inception in 1951, the Stovall Dental Family, has served the dental needs of the people of Wayne County, through three generations. He was a faithful member of First African Baptist Church, where he served on the Trustee Board and the chairman of the Finance Team. He received the honor of Trustee Emeritus. For his services in the community, he led the largest Voter Registration Drive in the county for five years. Thousands of people registered and voted for the first time. As a result of his dedication and continued community service, he was awarded the Longleaf Pine by former Governor Jim Hunt. Although flowers are welcome, donations can be made in memory of Dr. Stovall “Papa Doc” to: First African Baptist Church, Attn: In Memory of Dr. Orlando R. Stovall Jr., PO Box 1456, Goldsboro, NC 27533. Services of compassionate and distinguished class entrusted J.B. Rhodes Funeral Home and Cremations of Goldsboro.

Goldsboro - Dr. Orlando "Papa Doc" Stovall Jr., 99, passed peacefully on Thursday, September 9, 2021 at home. The celebration of his life will be an outside tent service on Monday, September 13, 2021 at 11:00am at First African Baptist Church,... View Obituary & Service Information

The family of Dr. Orlando "Papa Doc" Stovall Jr. created this Life Tributes page to make it easy to share your memories.

Send flowers to the Stovall family.