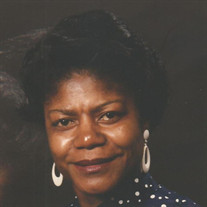 Dudley - Mrs. Peggy Jean Bryant Cartwright, gained her heavenly wings on November 11, 2020 at age 74. She departed this life due to COVID-19 on November 11, 2020 at Wilson Medical Center in Wilson, NC. A memorial celebration of her life will be held on Wednesday, November 18, 2020 at 1:00pm at J.B. Rhodes Funeral Home & Cremations, 1701 Wayne Memorial Drive, Goldsboro, NC. She was born March 25, 1946, in Duplin County, NC and later moved to Wayne County, NC. She was the daughter of the late Geneva Sanders Bryant and John Thomas Bryant. Peggy was the 9th of 12 children and as a child she loved to play hopscotch, jump rope, and play hide and seek. Peggy was married to the late Alvin Carl Cartwright. She attended Carver High School and graduated from Dillard High School in 1966. She was employed at Cates Pickles in Faison, NC for two years and at Mt. Olive Pickle Plant in Mt. Olive, NC for 30 years. In addition to being a dedicated and loving mother, she enjoyed sewing, cooking, making people laugh, gardening and caring for others. In 1994 Peggy became a part of the Body of Christ by joining St. Matthews Presbyterian Church of Dudley, NC, which later merged with Shiloh Presbyterian Church. Reverend Antonia Lawrence was pastor until 2015 and then his son Reverend Antonio M.K. Lawrence become co- pastor and later head of staff. Peggy was an active member until her death. She participated in Sunday school every week until the pandemic forced in-person participation to stop. She served as an ordained Deacon, Usher and Choir member. In past years she sponsored a musical program and worked with Fundraisers for the church. Peggy loved her pastor and fellow congregants, and she will be sorely missed. One of her greatest disappointments in life was losing her dog “Snow White.” Peggy loved people. She loved to laugh and joke around. Peggy had a seriousness about her and when it came to serving people, she did that well and with love. She leaves to cherish her memory two sons: David Carl Cartwright of Nashville, NC and James Curtis Cartwright of Dudley, NC; four grandchildren: Kayleisha Cartwright, Janissa McLamb, Devonte Cartwright and Nathaniel Casey; four great grandchildren: Kendra Cartwright, Kalyan Smith, Xzayvier Cartwright and Jasiah Miller; one brother, Vonnell Bryant of Goldsboro, NC; five sisters: Earlene Troublefield of Raleigh, NC, Josephine Glaspie of Warsaw, NC, Earnestine Brinson of Rainbow, NC, Doris Gray Bryant of Mt. Olive, NC and Minister Vera Mae Worrells of Dudley, NC; special friends: Michael (Beverly) Best, Ida Adams and Dianna Stewart and a host of nieces, nephews and friends. Peggy was preceded in death by her parent: John Thomas and Geneva Bryant; her husband, Alvin Carl Cartwright; her brothers: Robert, Elbert, Connell Bryant and JT Bryant; one sister, Minnie Rea Dunn; one grandchild, Ashley Cartwright and a friend, Frances Best. Services of compassionate and distinguished class entrusted to J.B. Rhodes Funeral Home and Cremations of Goldsboro.

The family of Mrs. Peggy Jean Cartwright created this Life Tributes page to make it easy to share your memories.

Send flowers to the Cartwright family.