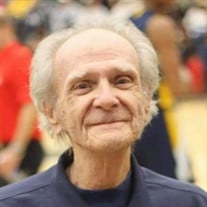 Goldsboro - Coach Terry Walls, 78, passed on Tuesday, September 28, 2021 at Wayne UNC Health Care, Goldsboro, NC. A memorial celebration will be held on Sunday, October 3, 2021 at 4:00pm at J.B. Rhodes Funeral Home & Cremations, 1701 Wayne Memorial Drive, Goldsboro, NC. He was born on October 25, 1942 in Milford, DE to father, Carlton Walls and mother, Marian Walls. He was the oldest of 5 children, brothers; Jerry, Russell, Doug and sister; Patricia. After graduating high school, he joined the US Navy in 1960 and served 3 years. He then re-enlisted and joined the US Air Force, serving an additional 17+ years. He served as an aviation electronics technician. While stationed in the Philippines, he met the love of his life, Pacita. They were married on September 27, 1963 and had 58 wonderful years together. They had 4 children, daughter; Nilda (Timothy), sons; Russell (Katy), Robert and Richard (Rebecca). A devoted husband and father, Terry worked in the computer and electronics field after retiring from the Air Force. One of his greatest passions in life was volunteering as a coach for many sports, including; baseball, basketball, football and soccer. He volunteered at Goldsboro High School in Goldsboro, NC for over 25 years. Many kids often referred to him “Coach” or affectionately as “Grandpa”. Terry is survived by his wife, Pacita, 3 children, Nilda, Russell and Richard and 11 grandchildren, 4 great-grandchildren, his brother Russell and sister Patricia. He is preceded in death by his parents and son Robert. He loved to talk about his family, especially all his grandchildren, who he loved dearly. “Coach” Walls will be greatly missed by all in the Goldsboro and Wayne County community. He had a tremendous impact on many of the kid’s lives that he coached and mentored. Services of compassionate and distinguished class entrusted to J.B. Rhodes Funeral Home and Cremations of Goldsboro.

The family of Coach Terry Carlton Walls created this Life Tributes page to make it easy to share your memories.

Send flowers to the Walls family.