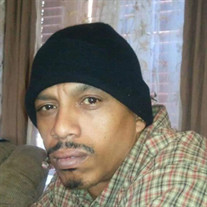 Goldsboro - Mr. Tyronnie Russell, 46, passed on Tuesday, August 31, 2021 at Wayne UNC Health Care, Goldsboro, NC. The celebration of his life will be held on Monday, September 6, 2021 at 11:00am at Mt. Zion Church Ministries, 323 Whitfield Drive, Goldsboro, NC. He will be laid to rest at the Golden Gate Memorial Gardens, 4734 Highway 117 North, Pikeville, NC. There will be a viewing held on Sunday, September 5, 2021 from 4:00pm to 7:00pm at J.B. Rhodes Funeral Home & Cremations, 1701 Wayne Memorial Drive, Goldsboro, NC. He was born on December 8, 1974 in Wayne County, NC to Carolyn Russell Wooten and Tyrone Frederick. He is survived by his children, grandchildren, brother and a host of aunts, uncles, cousins and friends. Services of compassionate and distinguished class entrusted to J.B. Rhodes Funeral Home and Cremations of Goldsboro.

The family of Mr. Tyronnie Keshon Russell created this Life Tributes page to make it easy to share your memories.

Send flowers to the Russell family.