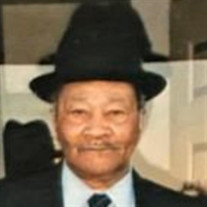 Goldsboro - Mr. William E. "Rat" Carraway, 85, passed on Monday, September 27, 2021 at home surrounded by his family. William Elton Carraway was the son of Mary Lewis and John Howard. He was born on July 21,1936 in Wayne County William received his education in Wayne County at Dudley School. He was employed at Seymour Johnson Air Force Base as a mechanic for 20 years before deciding to pursue a life of entrepreneurship. In April 1953, 68 years ago he married the love of his life Barbara Louise and to that union 6 children were born. William pursued a life of Entrepreneurship with his wife Barbara by opening a grocery store named Caraway’s Grocery. His children aldo worked in the store alongside of them. They served the Webb town/ Lincoln Home community for over 25 years. They were truly loved by the Webb Town community and were often asked if they would come out of retirement and open back up. He said as a kid he knew he wanted to be a "businessman." In his younger days he enjoyed traveling, listening to music and playing pool. It has been said that he was one of the best pool players around. He had a love for nice sharp cars and took pride in all of his. He loved his family and enjoyed sitting around telling stories and making everyone laugh. He was known to be stern and straight to the point. He was a sharp dresser and was also known for always having a soda bottle in his hand no matter where he went. He enjoyed talking to his neighbors in the tight knit Robinson Place community. He leaves to cherish his memory, three daughters, MaryAnn Artis of Marlow Heights, MD; Theresa Carraway Washington, of the home; and Wanda Carraway of the home; eight grandchildren: Termeria Carraway of Washington, DC; Tobias Artis of Marlow Heights, MD; Angel Sermone( Mike) Freeman of Goldsboro, NC; Victoria Carraway of Goldsboro, NC; Willie Durrell ( Latesha) Washington of Greenville, NC; Tymyra( Andre) Screen; Leslie Isler of Washington D.C.; and Melton Duron Smith of Snowhill, NC; four great grandchildren- O’Shai Caldwell of Washington, DC; Anthony “ Ant” of Goldsboro, NC; Avariah Bryant of Goldsboro, NC; and Duron Karter Smith, of Goldsboro, NC; One sister Jennette Goldwire, of Dudley, NC; two sister in laws Vivian Weldon of Washington, DC; and Edna Deleon of Oxon Hill, MD; one brother in law Tommy Cole of Pineville, LA; two nephews Jerry and Gerald Whitfield and a host of relatives and friends He was preceded in death by his beautiful wife Barbara L. Carraway; one son- William E Carraway, Jr; two daughters Peggy Jean Carraway Sutton and Diane Carraway; two sisters Beulah Mae Coley and Betty Whitfield; two nephews Donnell Whitfield and Ed Lee Coley Services of compassionate and distinguished class entrusted to J.B. Rhodes Funeral Home and Cremations of Goldsboro.

The family of Mr. William Elton Carraway created this Life Tributes page to make it easy to share your memories.

Send flowers to the Carraway family.